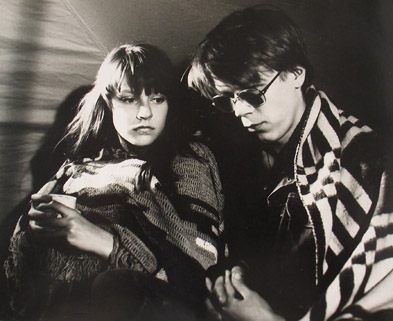 The Plus Camerimage Festival, held in Bydgoszcz , which is dedicated to the art of cinematography and its creators, featured the program, “Lithuanian Cinema  – Sharunas Bartas Films” in October last year.

The program’s presentation states, “This is the auteur's cinema in its purest form.” Thus it describes the films made by this Lithuanian director over some two decades and his cinematic magic.

The films by Sharunas (Šarūnas in Lithuanian) Bartas that were shown in the program were Koridorius ‘The Corridor’ (1995), filmed by cameramen Rimvydas Leipus and Vlado Naudžius and Namai ‘The House’ (1997), filmed by cameramen Rimvydas Leipus and Sharunas Bartas. Additionally the movies shown that were filmed by Sharunas Bartas alone were Mūsų nedaug ‘Few of Us’ (1996), Septyni nematomi žmonės ‘Seven Invisible Men’ (2005) and his latest film, which opened the program,  Eurazijos aborigenas ‘Eastern Drift’ (2010).

Plus Camerimage is probably the largest festival, which is designated to foster the prestige of the people behind the cameras and their art form.

For more information about this festival, please see www.pluscamerimage.pl

Scene from the movies Few of Us

Barzakh, a movie by Mantas Kvedaravičius, merited two prizes at the International Tallinn Film Festival. It was recognized as the best film from the Baltic countries. Its director was given the FIPRESCI award.
Aš perėjau ugnį, tu buvai su manim 'I Went Through Fire, You Were With Me', a movie by Audrius Stonys, won the main prize at the international DeboshirFilm Festival, held in Saint Petersburg